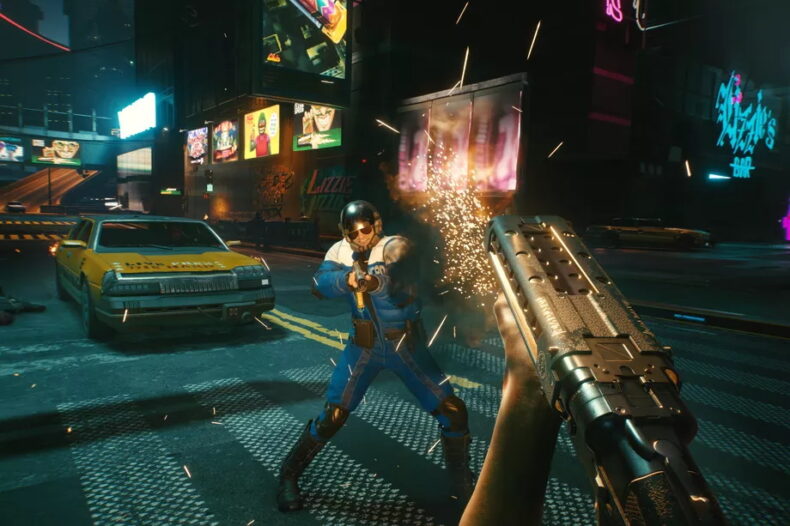 The pre-ordered version of the Cyberpunk 2077 didn’t really play out as expect for many players who tried playing it for the first time on PlayStation 4 and Xbox One Consoles. The consoles were riddled with bugs as the graphics broke from all sides.

I have seen videos of the game where cars would simply go through walls and police NPCs were standing half above the ground and half of the body was buried in the ground.

“New hotfix to #Cyberpunk2077 is now live on PlayStation consoles and PC,” the team at CD Projekt Red said in a tweet. “For Xbox systems, we are working to have the update out as soon as possible.” To make sure you’ve got it installed, keep an eye out for hotfix 1.04.

The new patch arrives one day after the launch of Cyberpunk 2077 brings “Disable Copyrighted Music” Toggle which would be quite useful for content creators in order for them to avoid getting copyright strikes all the time while they try to upload more and more videos and content relating to the game.

There were some flashing light issues that were faced by some reviewers which caused episodes of epileptic seizures before launch. This lead the Polish studio to patch in an epilepsy warning.

Hopefully as time passes there would be some more patches for the game that would make it more enjoyable on the older consoles as well as the new ones.

by JauntyM on December 6, 2021
Xbox Game Pass has been slowly and steadily gaining a lot of traction as people get a bunch of games they can play without having to pay anything extra to get them as long as they are included in the list of games available with the game pass [...]

Battlefield 2042 not having a good start with Steam Reviews

by JauntyM on November 23, 2021
Battlefield 2042 started off with 29K reviews in negative which makes it one of those games that have the highest negative reviews on steam. So not a very good start for the game. Its only been two days for the game to be released and people are starting [...]

PlayStation Plus Games for October 2021

by JauntyM on September 30, 2021
PlayStation fans are getting the following games: Hell Let Loose, PGA Tour 2K21, and Mortal Kombat X. Hell Let Loose This game might be interesting for many players if they have not tried it before as it includes multiplayer battles for up to 100 players [...]
Comments
Leave a reply