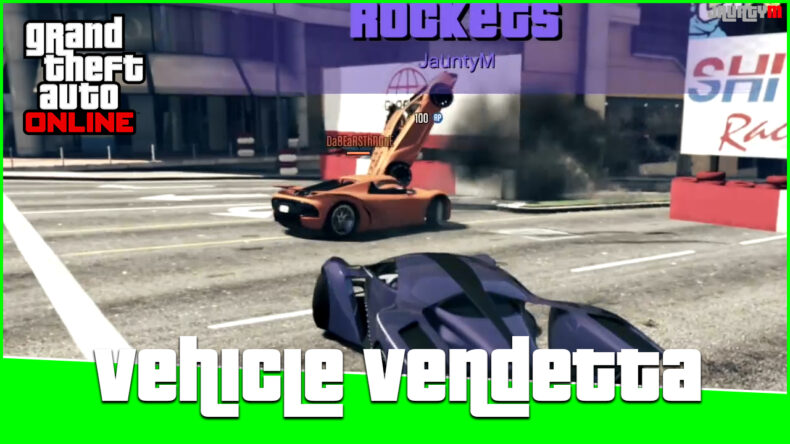 “Now you can exercise your pent up road rage without concern for LSPD response units in Vehicle Vendetta -the new Adversary Mode that pits you and your teammates against an opposing crew of motorized maniacs, all competing for power-ups that can singlehandedly turn the tide of battle.” — Rockstar Newswire description. Vehicle Vendetta[1] is an Adversary Mode featured in Grand Theft Auto Online as part of the continuation of the GTA Online: Import/Export update, released on January 2, 2016, during the FCR 1000 Week event. Two teams start on opposite sides of the arena in a sports car of their choice, armed with twin machine guns to take out the opposite team’s cars. Players should be careful when moving around the arena if playing on the Vehicle Vendetta version, as falling from the same will count as a penalty for the team (losing points in this case). Power-Ups Power-ups are used during gameplay to add an element of destruction and action to the mode. These are the power-ups that are available to the player: Zoned: Slows down time for all players for five seconds. Flipped: Reverses the enemy team’s steering, acceleration, and braking controls. Detonator: Removes obstacles and objects from the arena. Bomb: Place up to three bombs around the map to destroy trailing enemies. Beast: Automatically transforms the player into a Rhino Tank. It last for 30 seconds. Jammed: Forces the accelerator on for the enemy team’s vehicles for five seconds. Repair: Returns vehicle back to max health. Ghost: Become translucent for 10 seconds, allowing you to drive through enemy vehicles to steal their power-ups and to avoid deadline trails. Rockets: Fire rockets at oncoming drivers to incapacitate them. These works in the same way as in a GTA Race. Deadline: Automatically switches the player into the Nagasaki Shotaro, complete with devastating light trail. It lasts for 15 seconds. Random: Chance to collect any power-up except Detonator. They are represented in the upper side of the screen and also warns if the rival team has a power-up (mainly “Beast” and “Deadline”)

by JauntyM on December 16, 2021
The Contract is the latest update for Dec 2021 for GTA 5 Online. Dr. Dre has lost his phone that has some very sensitive data (his unreleased music) that needs to be retrieved. We help him get his phone and the copies back from different people while we [...]

by JauntyM on December 14, 2021
Praey for the Gods releases Dec 14th 2021 on PS4/PS5. PS4 versions come with a free PS5 upgrade! Climb enormous enemies in this snow filled open-world adventure game where you play a lone hero sent to the edge of a dying frozen land to explore and solve [...]
Comments
Leave a reply 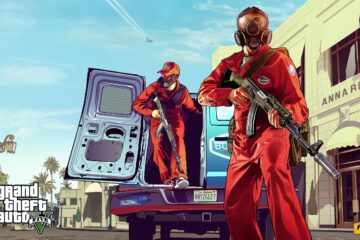