16
new
Grand Theft Auto Trilogy Being Removed From Sale Ahead of Definitive Edition Release
Cricket 22 Coming Soon for the Cricket Fans
Shiba Inu Coin Went Up almost 100% and Came down
Playing GTA 5 Story Mode in 2021 – Prologue – Part 1
PlayStation Plus Games for October 2021
Netflix rolling out free games to Spain & Italy for starters
This guy takes a boat where no man has gone before with his boat
The Guy Shoots Down 7 Lazer jets in a go in GTA 5 Online
Marvel’s Guardians of the Galaxy – Lead the Guardians: Combat Gameplay | PS5, PS4
Will Seong Gi-hun go into the Squid Game Season 2 playing another Squid Game?
Xbox One Players Disappointed With New Free Games
PS4 coming up with some good discounts right now
‘Disney Classic Games Collection’ Adds Aladdin SNES And “All Versions” Of The Jungle Book
Sony’s new PS5 firmware can make your games slightly faster
Ex-Ubisoft Devs Open New Studio Want to Make RPG style games
Sad News Before The God of War Ragnarok is released even (Might be the last in the series) 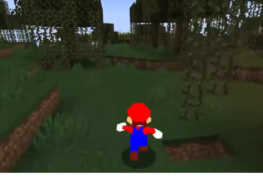 As hard it is to believe but a modder named Dylan posted on his twitter about him playing the Minecraft game using a Mario 64 skin. There is a working example he shared in a video on his tweet where he was roaming about in the world of Minecraft with that [...]
6
by JauntyM
-1
-1
Copyrights Reserved PakGamersHub.Com
Fonts by Google Fonts. Icons by Fontello. Full Credits here »